Game a Day May Post-Mortem: The Business Card Games 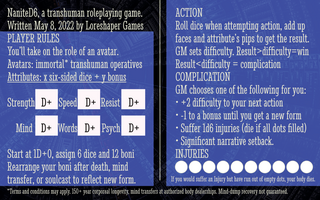 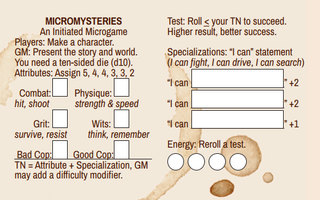 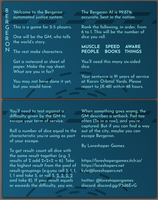 Since I made a game a day in May I didn't exactly have the time to go in and do a lot of writing about what I was doing, but I want to take a moment to talk about business card games in particular. I'll continue breaking down my postmortems into chunks for the smaller games and do separate postmortems for each of the longer games.

Four of the games I made are business card games. These are NaniteD6, Micromysteries, Station Breached, and Bergeron.

NaniteD6 was the first, and probably the most simple (though when you're working with a business card that can be a hard judgment to make, but it was also a really quick introduction to all the problems you'll run into when working on a very small game.

First, I had to fit the text on here. The game rules are inspired by classic D6 system games, though I don't know how much overlap there is since it's been years since I've actually revisited the rules. Instead, I was playing a little Mechajammer, which is powered by a similar core mechanic.

The core is that you roll several six-sided dice, add modifiers, try to meet a threshold, and basically survive or die. The setting is your fairly standard Altered Carbon style transhuman science-fiction, where death is a temporary setback, so you can rearrange your bonus modifiers every time you die (though you have penalties for coming back, making death undesirable).

There are even advancement rules.

As a game, I think it's a little iffy. The core mechanics would actually be sufficient for a one-shot, but the business-card style doesn't actually let you write out your character's attributes well due to how small the blank is, and I had several issues getting it to export correctly.

The font, Stint Ultra Condensed, is one that I actually like, though not so much for the body-text use that it's been forced to carry here. Since the game is reasonably short, I think this is fine. The font reminds me of Eclipse Phase's use of Heliotype, which has some nostalgia for me.

There's a basic bit of everything here, including some setting and GM rules, but as a business card all it got was my email and that's not ideal.

Further, it's ugly. It's not "expose it to the elements like in Ancient Greece" ugly (I think), but it's not elegant and graceful. Nice pops of color, but color alone does not a perfect visual experience make.

The first Initiated SRD creation, at least from the perspective of "this was based on the Initiated SRD" since the Initiated rule-set is an evolution of the rules for Hammercalled, Segira, and Kenoma (though really it's a branch off Kenoma).

I think it's better as a business card game because it just requires a single d10. This is easy enough that you can carry it in your pocket without the whole "why do you have a bunch of dice?" thing, though you'd probably still get bullied for carrying funny dice around.

The spaces for the on-card character sheet are better than in NaniteD6. Archivo Narrow is an exemplary font IMO, and I like the simple gumshoe-style design of the coffee-rings on beige.

As a business card, this works better, since it has the credits and links section and also my email. If I were printing just one of the business card games I made, it would probably be this one, though I might do a little cleaning up of visual elements, just because it combines my SRD and the other stuff.

An interesting thing here is that I moved from the d100 Initiated standard die to a d10, and generally just kept everything else the same. Very simple, very fast, and I like it, but I'm going to talk more about Initiated some other time and don't want to toot my own horn too much.

A *shock-style game inspired by Prey (2017), Station Breached is a Breathless game and I think it might be my favorite of all of them as far as "what have you done with the card" perspective.

It's basically the most vanilla Breathless SRD title you'll get, with basically everything perfectly represented including the d20-based search mechanic.

I love Breathless, and I'll talk about it more at length similar to Initiated.

The gradient and art deco background were a massive pain to get exported, since the PDFs kept coming out with inaccurate colors. I think the overall setup is pretty good. Stint Ultra Condensed returns, I think perhaps a little less effectively, but when you're trying to condense an entire page-and-a-half of rules onto a business card (and Breathless doesn't waste space in its PDF format), you do what you have to.

I say Stint is less effective here, but I don't think that's the worst part.

The one thing I feel kind of weird about is having the credits in a different font/text layout, but René-Pier over at Fari RPGs doesn't seem to mind it and I know my work is familiar to him. Some people have clauses about that, but since I literally copied the blurb from the character sheet and made it less transparent, I think it's fine.

Bergeron is a unique system for a business card, and has an odd probability curve that probably would be difficult to get an intuitive grasp for but gives "spiky" results (most results fall in the 1-10 range, with a maximum result of 36!). I actually went back to make a couple minor tweaks just now, so if you've already downloaded it there's a minor fix in the rules instructions.

I think it's aesthetically  the most pleasing of the bunch, and also has the best business card functionality of all of them. Mechanically quite simple as far as how characters work, but in actual play I think it would work out as a system that has some interesting natural effects.

The reason for this is that I wanted to have a linear scale for character attributes (1-6), but a curve for results (with weighting near the bottom). To do this I made it so that you take the highest result from any grouping of result numbers (all 1s, all 2s, all 3s, all 4s, etc.). This means that a character with two dice can roll 6 and 6 to get a 12, but a character with six dice who rolls a mix of 1s, 2s, and 3s is going to have a bad day (but not so bad as a character who just flubs with a 1 on a single die).

I'm not sure anyone else has used this mechanic in a tabletop roleplaying game, though a similar mechanic is out there in Yahtzee. The closest I can think of is Legend of the Five Rings (old-school style), but that's another thing I haven't touched in years and can't quite remember other than knowing that they had some self-interacting dice mechanics.

Again, it's the most business-card of them, and the aesthetics are better. I'd probably go with Micromysteries or Station Breached for printing, but it's a cool concept and I think it could be developed out into something more.

Get May 2022 Games Collection

A daily collection of games I made during May 2022