“I shall remember: When Caesar says ‘Do this,’ it is performed.”

The Emperor Decrees is a collaborative storytelling game.  Featuring a GM or diceless oracle, it features a turn-based resolution system that lets each player describe the actions of an empire's agents as they carry out decrees from their emperor.

Of course, since the game is setting-agnostic, they could also be political operatives in a Soviet satellite, ruthless businesspeople in the employ of a multinational corporation, or members of any organization pursuing its goals.

The focus is two-fold. While playing, players will develop a world full of heroes and overcome a plethora of challenges, but they will also grow their agents and the empire to enable higher stakes and even greater action.

Intended Players: 2+ (can scale with any number of GMs and players, though logically the limit is probably around 10) 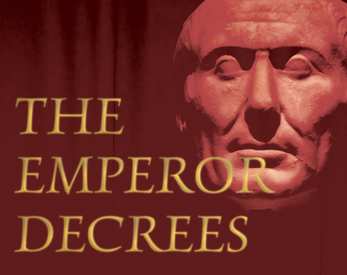