All of the first edition Velotha's Flock stuff, prior to moving on to the next step, which is going to be a second edition that isn't just in free verse. The free verse thing is kind of a schtick, and if the Second Edition ever spreads its wings I'll make sure to include a free verse element. I believe this to be the first game of its magnitude written in free verse; this may not be the greatest idea ever had, but it's a start.

The idea behind Velotha's Flock was fairly simple; I had a moment of inspiration and decided to take it and make it something better. The first elements of the setting came together more or less by accident; I had a handful of numinous encounters with ravens, mysteries, and a woman in a black muscle car.

And from the simple seeds I saw, I realized that there was a place for an epic struggle played out across the cosmos; things from our world and beyond our world.

Velotha's Flock has the distinction of being Loreshaper Games' first official product; I'd made games before this (awful, horrible things that have been thankfully lost to the mists of time), but this is not only the first game that I felt legitimately proud of but also enjoyed quite a bit.

driven from their home they nest among mortals korakthropes, wereravens with the spirits of men but great powers they are lost seeking a Promised Land or at least a place to roost

download now and check out the early bird edition 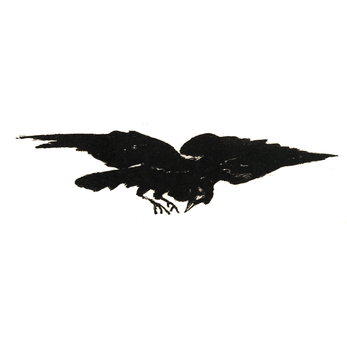